Been awhile since I’ve blogged here. Haven’t been following the Transhumanists, so nothing to report there. I’ve also been too busy creating short films to do reviews on others’ work here. What have I been doing? Well, there’s this:

Ziplining at Hocking Hills (photo by somebody, who knows, guy that worked for the company)

Sue (on flute) and Katie (on mic) with Marty in background doing some Peggy Lee at Sofrito. (photo by Big Al, your blues pal)

Everyone has a theme song that will, upon their death, be playing as they enter the pearly gates. Milt Buckner’s “The Beast” is mine.

When I meet St. Peter, I’ll be playing my flute along with Milt. We’ll raise a little hell. What’s your theme song? 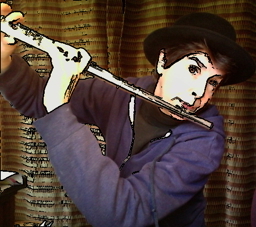 A few years ago I was a Famous Rock Star. See Exhibit A. That’s me on the right. Gary’s on the left.

After a while, all that unconditional love got boring so I hung up my axe and my mike and moved on to become a Leading Literary Figure. See Exhibit B.

I find myself today in need of a brief return to my former muse: music. My, but hasn’t the world changed in the last decade or so!

When last I left the music, the mp3 was just gaining mainstream acceptance. But not necessarily by musicians. The thinking back then amongst my friends and peers was that, being compressed, mp3 files would never gain prominence. Sure they were easily portable and good for sampling or to give a taste of your music to potential fans — especially those without a discerning ear — but the quality was such that nobody would ever actually pay for them. We wrote off the mp3 like it was a consumer model Casio.

I guess it had been long enough from the late 70s/early 80s for us to have forgotten how crappy the pre-recorded cassettes were. Despite the fact that serious music lovers desirous of a superior cruising experience would buy the album and a hi-end Maxell and tape the record themselves, those crappy cassettes sold by the millions.

We were short sighted to think mp3s would never find a place in the money-making world. Especially since the quality of the mp3 was never as far from the original as the pre-recorded cassette was from the album. Up until last week I couldn’t tell the difference between the two myself.

But last week I returned to my former muse: music. My previous ten years or so of casual listening had overlooked loss of data, but now returning to serious study revealed shortcomings in the mp3 compression.

Back in the day, there was a certain Traffic song — 40,000 Headmen — that my partner, Gary, insisted the band learn. It’s sort of an ethereal Samuel Coleridge-like song about a guy who steals gold from a bunch of ethnical headmen, whatever they are. Cool song with a killer flute part that was a bitch to figure out. I sat for hours rewinding the song to figure out the spacey riffs.

Jethro Tull notwithstanding, flute in rock music is for the most part window dressing. It’s rarely featured, never respected, mostly unloved. Traffic was a musician’s band, though, so they did interesting stuff and were more respectful than most. However, being experimental, they often wrote weird, almost illogical, and hard to figure out stuff. I labored heavily over 40,000 Headmen.

Back in the day, about five minutes after I put in all that work on the song, the band threw in the towel. I hung up my axe in preparation for my life as a Leading Literary Figure, leaving the hell of Famous Rock Star life and Traffic esoterica behind.

Fast forward to a few months ago and we find Gary dusting off his guitar and  “noodling.” Noodling eventually led to riffs from set lists of days gone by. Set list riffs led to wistful reminders of songs never performed but viable nevertheless. Eventually he got to the intro of 40,000 Headmen.

Immediately my knees jerked. “No,” I said, “I’m a Leading Literary Figure now. I have no time for those juvenile dreams.”

He began whistling the flute part. Nothing bugs me more than the unwashed trying to imitate flute. I reminded him how much time and effort the song had taken me in the first go ‘round and I never liked it that much in the first place.

He began singing it aloud. I said, “No, no, no,” as I searched under the couch to see if my flute was where I had left it.

He couldn’t remember all the lyrics so he downloaded the song from itunes to his nano. He hooked the nano up to his speakers and blasted it to the rafters. There is nothing more inspiring than Traffic in the attic. I caved and agreed to relearn the song by the end of this month: his birthday.

I am not going to learn anything else. I am not going to pull out the rolodex of booking agent numbers. I am not going to put together a video to get us gigs. I will not be hanging ads for rhythm sections in the local coffee shops or in the pages of music rags. I AM NOT GOING TO TEACH ONE MORE EFFING BASS PLAYER THE CHORD PROGRESSION TO 1-4-5 BLUES. It’s just too demoralizing.

But assuming it would grant peace and tranquility over the home front, I worked out the flute part to 40,000 Headmen.

This time, though, instead of the incessant fast forward/rewind procedure used in the world of cassettes, I did the ipod shuffle, which was slightly easier, but still fraught with annoying overshoots and accidental bumps back to the beginning. It was a tedious process, but gratifying when done because I know I’m the only idiot that would do that much work for no money. No one plays rock flute and even if they did, they don’t remember this song, let alone want to learn it.  (I just googled “flute part for 40,000 Headmen” and I got 159,000,000 pages of guitar tablature returned. No one is interested in the flute part.)

I wound up with a half-way decent string of notes that sort of represent the flute parts to the song. Whole sections were unintelligible because the high notes are buried underneath the guitar or vocals or keyboards or some other synthesized sound. The song always had those problems, but this time the problems were worse. I did the best I could and when I present it on the 31st I will be doing a lot of faking. I just couldn’t cipher out some of the material.

I blame it on the mp3 compression.* The results really aren’t as good as the CD. That’s the conclusion musicians back in the last century came to: mp3s are just not hi-fi.

Is this a quality of life issue due to our technological advancement? I daresay most of us aren’t even aware of this loss of audio quality. Nobody’s paying attention. I wasn’t. The whole thing creeps up on us until facsimile is good enough. The real thing fades slowly into the past until eventually no one misses it anymore because no one has experienced it in years.

Folks, I give you The Singularity.

*It could be that I’m just getting old and losing parts of my hearing, though, too. In that case, bring on the Singularity and a music feed to the aural center in my brain: let me just think I’m hearing Traffic.

A Perfect You film

Check out the website for the short film by Sue Lange